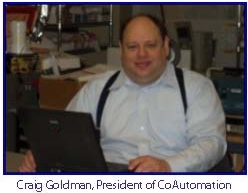 CoAutomation was founded in 1999 by Craig Goldman, a graduate of MIT’s Deparment of Electrical Engineering and Computer Science. Craig Goldman is a recognized innovator and inventor who holds ten U.S. patents and has made essential contributions to dozens of commercially successful products.

CoAutomation products are “well-behaved”. Craig Goldman works with the client to define product behavior early in the design process and then create detailed specifications of product functionality. Microcontroller code is developed using proprietary programming techniques to create virtually bug-free firmware. The result is a full-function product with no unexpected glitches or hiccups.

A few of Craig’s noteworthy engineering achievements are:

Craig Goldman / CoAutomation is proud to be a Senior Member of the IEEE and an active member of both the Boston and Worcester Massachusetts Sections of the IEEE Consultants’ Network.